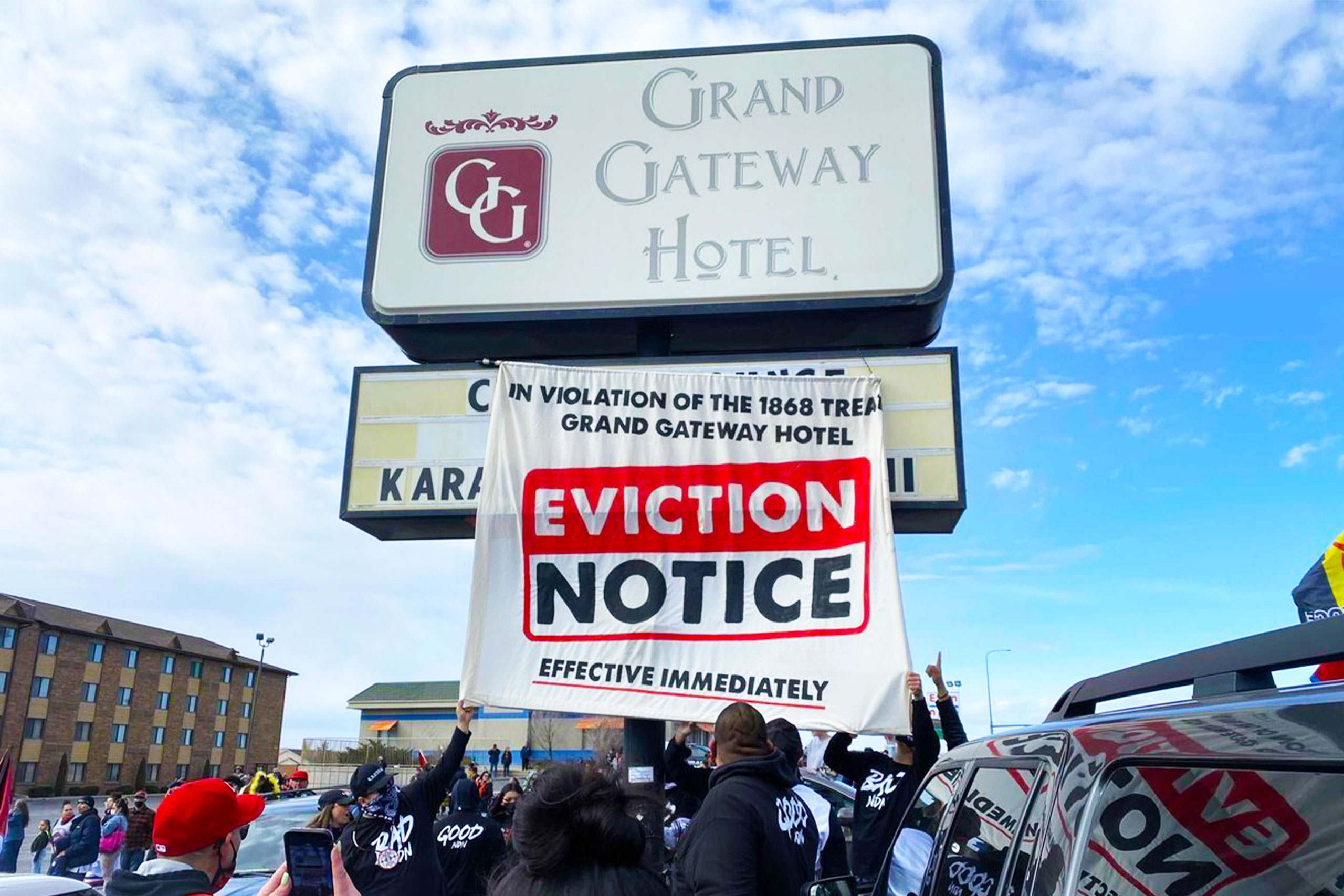 In response to racist comments made by the owner of the Grand Gateway Hotel in Rapid City, South Dakota, tribal leaders of the Oceti Sakowin (The Great Sioux Nation) deliver Notice of Trespass and Eviction. Following a shooting that occurred at the hotel on Saturday, March 19th, owner Connie Uhre took to social media to announce a new guest policy, that “we will no long[er] allow any Native American on property.” As the public demanded accountability for blatant racism and civil rights violations, tribal leaders of the Oceti Sakowin along with grassroots organizers quickly responded by organizing marches in Rapid City. The NOTICE OF TRESSPASS (CEASE AND DESIST) states the following:

YOU ARE HEREBY NOTIFIED that the Great Sioux Nation has made an investigation, and
evidence shows that you are in trespass. You are in violation of the following provisions of the
Treaty with the Sioux, April 29, 1868, 15 Stat. 635 (“Treaty”).

Article 16.
“…no white person or persons shall be permitted to settle upon or
occupy any portion of the [land north of the North Platte River or east of the
summits of the Big Horn Mountains]; or without the consent of the Indians first
had and obtained, to pass through the same;”

Article 2.
“…[land which includes the above-described property] shall be, and the
same is, set apart for the absolute and undisturbed use and occupation of the
Indians herein named …and the United States now solemnly agrecs that no
persons except those herein designated and authorized so to do, and except such
officers, agents and employees of the Government as may be authorized to enter
upon Indian reservations in discharge of duties enjoined by law, shall ever be
permitted to pass over, settle upon, or reside in the territory described in this
Article..

Article 1.
“If bad men among the whites … shall commit any wrong upon the
person or property of the Indians, the United States will, upon proof made to the
agent and forwarded to the Commissioner of Indian Affairs at Washington City,
proceed at once to cause the offender to be arrested and punished according to the
laws of the United States, and also to re-imburse the injured person for the loss
sustained.”

YOU ARE FURTHER NOTIFIED that, in accordance with the Treaty and the laws located in
the United States of America, and as a consequence of your act, you must permanently cease and
desist from the violations charged. You are instructed to vacate and remove your persons and
any personal property you deem necessary from the Treaty Territory of the Great Sioux Nation
immediately.

YOU ARE FURTHER NOTIFIED that the Great Sioux Nation, in order to prevent further
trespass upon said land, may without further or any additional notice of any kind whatsoever,
and without liability, take possession, destroy, or remove said property at your expense. The
Great Sioux Nation hereby elects to declare forfeiture or abandonment of any property that you
occupy or use if you fail to cease, desist, and vacate the Premises. Noncompliance with this Notice of Trespass will institute legal proceedings to recover possession of said premises which shall result in a declaratory and/or monetary judgment against you, including costs.

Days prior to delivery of the Notice of Trespass, Native American staff members of Indigenous Peoples Power Project’s partner organization, NDN Collective were denied rooms on two separate occasions. NDN Collective Director of Racial Equity, Sunny Red Bear attempted to book a room on Monday, March 21, and was told by the front desk attendant that the Grand Gateway Hotel does not allow local residents to book hotel rooms, stating that this was a policy due to the fact that rooms allegedly were getting “trashed” by locals. In another attempt, NDN Collective Director of Operations Alberta Eagle attempted to reserve a block of rooms for the organization, and was not only denied rooms by the hotel front desk attendant, she and a group of four other Native American staff of NDN Collective were kicked out of the hotel by the manager while waiting in the hotel lobby.

To follow latest developments as this story unfolds, we encourage you to check out the NDN Collective website, and to keep an eye on national news outlets. This is yet another example of discrimination against Indigenous communities, and ongoing efforts to create a more just and inclusive society for all people and the planet.