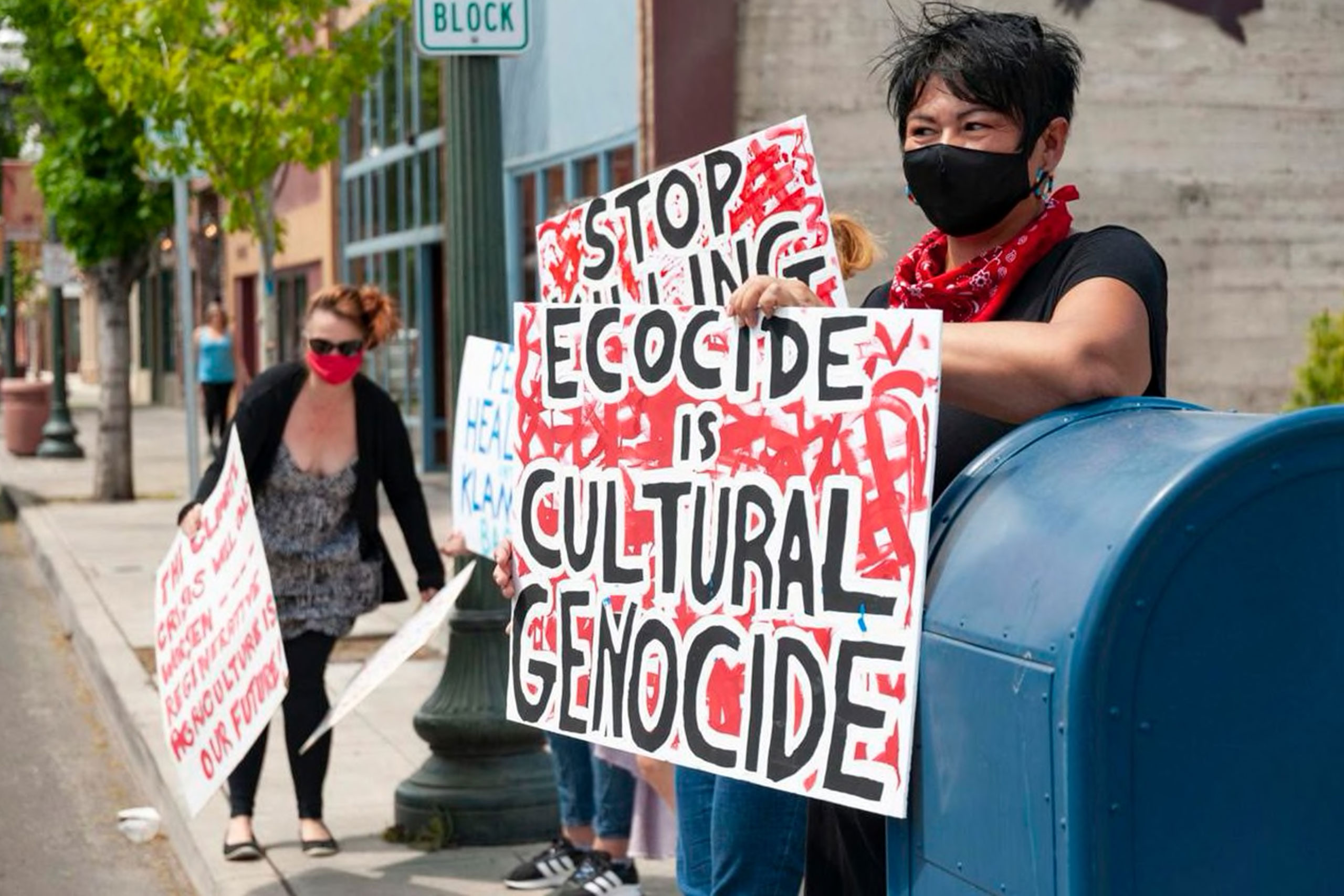 The morning of May 12th, Klamath Tribes wrote a press release in response to the Reclamation announcement from a federal judge that voted against the treaty rights that say the tribe gets first say over water.  This means the Klamath Tribes will experience one of the worst droughts this summer due to climate change and that the lake and the fish who inhabit it, is dying.  Once again,  here we have another example of treaties only meaning something when the government says so and capitalism ruling over endangered species, land and water.  The Reclamation announcement stated that “there will be no water for flushing flows to mitigate disease risk for salmon in the Klamath River.”

Below is the remainder of the press release from Klamath Tribes

“We continue to believe that it is beyond tragic that a century of mismanagement of our natural environment has culminated in tribal peoples struggling among ourselves to protect our homelands, our ways of life, and our communities,” said Tribal Council Member Clay Dumont.

The Klamath Tribes urge the Biden Administration to do all it can to begin laying the groundwork for honoring treaties with tribal nations up and down the Klamath Basin by emphasizing long term, sustainable practices.

We also feel for the Klamath Project irrigators. “Our people have far too much experience with being cut-off from our means of subsistence, and we wish that pain on no one,” Tribal Council Member Dumont said.

The Tribes appreciate that Reclamation made the only decision reasonably available to it, to protect the already compromised elevations in Upper Klamath Lake by limiting agricultural diversions and declining to force additional water down river for a flushing flow at the expense of the biological needs of C’waam (Lost River suckers) and Koptu (shortnose suckers) in Upper Klamath Lake.

“Conditions for the C’waam and Koptu in Upper Klamath Lake are extremely precarious, with limited rearing habitat currently available to them and the risk of poor water quality conditions looming,” said Klamath Tribes biologist Dr. Alex Gonyaw. “A further precipitous decline in UKL elevations would have compromised whatever chance this year’s class of newly spawned fish might have of making it through their first year of life, and posed unacceptable risks to the remaining adults, whose survival is essential to the continued viability of these species.”

The Tribes remain concerned, however, about the hydrologic projections for the remainder of the water year, and the effect Reclamation’s further management decisions may have on the C’waam and Koptu.

“We have been told that Reclamation intends to maintain UKL above an elevation of 4,138.0 feet for the remainder of the water year, which is the bare minimum elevation the U.S. Fish and Wildlife Service has determined to be necessary to allow C’waam and Koptu access to important water quality refuge areas in UKL with a contained risk from being eaten by birds,” Dr. Gonyaw said. “It is essential that Reclamation live up to this commitment to minimize the risk of a massive fish kill that could doom these species to extinction.”

The fact that neither Project irrigators, nor C’waam and Koptu, nor salmon in the Klamath River will have access to sufficient water to satisfy their needs this year underscores how desperately the Klamath Basin needs to adapt to a more sustainable future.

“Today’s announcement from Reclamation is just the latest illustration of how far beyond their means water users in the Basin have been living,” said Tribal Council Chairman Don Gentry. “The definition of insanity is to do the same thing over and over again and expect different results. Until this Basin adapts to a drier future, we will continue to find ourselves facing these conflicts. Fish cannot survive a year without water, and the Tribes are committed to doing everything in our power to protecting and restoring to health the populations of C’waam and Koptu that we and our people have relied on for millennia.”

For this reason, drought relief efforts should be crafted with an eye toward longer term solutions rather than single-year patches that will simply leave the Basin in a similar position if next year proves to be another dry one.

“Relief payments to irrigators, including tribal members who farm and ranch, and to compensate for impacts to fishing opportunities are one thing,” said Tribal Council Treasurer Brandi Hatcher. “But anything that incentivizes further groundwater pumping to make up for the lack of surface supplies this year will only make conditions in the Basin worse. The lower the water table is depleted, the more water we will lose in the future that otherwise might have accreted to surface sources.”

The Tribes also urge Reclamation to step up its efforts to introduce more water to the Klamath River from California tributaries such as the Scott, Shasta, and Trinity Rivers.

“Upper Klamath Lake plainly cannot support all the demands being put on it. If more water were flowing into the Klamath River from other sources, the needs of C’waam and Koptu would be less often pitted against those of salmon,” said Tribal Council Secretary Roberta Frost. “Getting more water in the River from other sources this year will also be critical to ensure that we avoid further conflict later in the season between Reclamation’s obligation to maintain UKL above elevation 4,138.0 while also providing minimum river flows for salmon needs.” – https://www.klamathfallsnews.org/news/klamath-tribes-issue-statement-on-bor-water-management-announcement

Klamath Tribal members have been facing a lot of racism and threats of violence over the water control.  This is unacceptable and IP3 stands with the Klamath Tribes in their fight to protect and preserve their inherent right to the waterways on their land.

More links below on the Klamath Tribes water fight